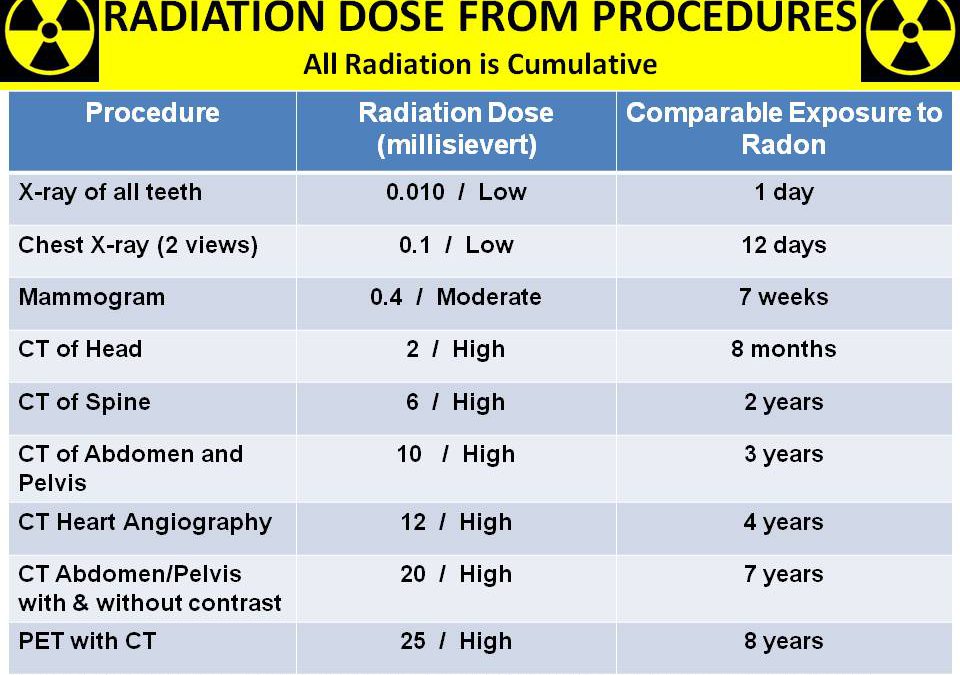 Anne is 46 and received radiation to her face to treat acne. She also remembers putting her feet in an X-ray machine to see her feet in her new shoes. She has had 5 mammograms and sleeps with an electric blanket and clock radio near her head. 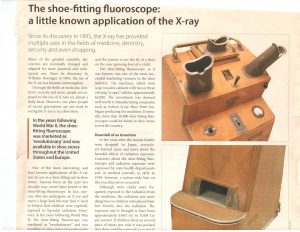 There were more than 10,000 Shoe-fitting Fluoroscopes in the U.S. by the 1940s having 2 or 3 viewing scopes allowing the store clerk, parent and child to see the fit of a shoe on the child’s foot. Children were exposed to High amounts of radiation (1.16 Gy) if they tried on 2 or more pairs of shoes. Burns, stunting of bone and cartilage growth led to the banning of these machines in 1970 in 33 states.  How many of you remember this?     Source: HemOnc Today May 10, 2008

Mammogram. The radiation dose from current mammographic two-view examination techniques (1-8 mGy) is extremely damaging to the glandular tissue even though it is less today than before.

The National Academy of Sciences and the National Cancer Institute estimate that for every 100,000 women at age 40 who are screened using mammography, there will be 10 more cancers than are normally seen in that age group due solely to mammograms. The estimate of 10 excess cases is based on the delivery of 1 cGy per mammogram per woman – the amount of radiation delivered by a technically good mammogram unit. However, as more radiation is delivered with older units or poorly calibrated units, this number will be higher based on the higher dose delivered to each patient.

CT Scans.   Almost 85 percent of the radiation to which we are exposed in developed countries is from natural sources, but 15 percent is from human-made sources.  Of these, about 97 percent is from diagnostic radiology – mainly CT scans.

Children commonly receive an overdose of radiation when they have CT scans.  In fact, they receive doses that are at least five times greater than necessary. Radiologists can reduce the dose without compromising image quality but they do not. The number of indications CT scans are used for children has increased dramatically.  So if a child today has two or three CT scans of the same area – each giving 2 to 3 cGy per CT scan – over the long term, the risk of cancer is increased significantly.

Do children who hit their heads need a CT scan? Usually not.  A careful physical exam is all that is usually necessary. The exceptions are: if the physician suspects a skull fracture, or bleeding in the brain, or the child was in a car crash, or fell off a bike without a helmet, or is unconscious, or has hearing or visual loss.

The lifetime risk of developing cancer attributable to diagnostic X-rays is 1% to 2%, except in Japan where it is 3.2%.5 Table 1 shows the actual number of cancers per year in various countries relative to the number of X-rays given per 1000 people.

Table 1. Number of Cancers per Year from Diagnostic X-rays 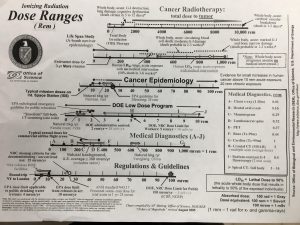 Anne is making changes.  She moved her clock radio, doesn’t use the electric blanket, and began following the Ten Point Plan, including protective antioxidants.  She will only get a mammogram if it is indicated.