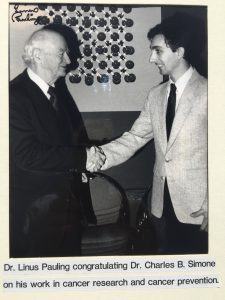 Lawrenceville, NJ (Dr Simone) – On February 28, 1991 – Professor Pauling‘s 90th birthday – he and his colleagues found that Lipoprotein(a) was increased when vitamin C levels were low, perhaps as a protective mechanism since Lipoprotein(a) binds to weakened arterial walls (less collagen and elastin fibers) to repair damage – like a patch. But they suggest that too much Lipoprotein(a) leads to plaque formation. This formed the basis for his Unified Theory of Human Cardiovascular Disease: “Ascorbate (Vitamin C) deficiency is the precondition and common denominator of human Cardiovascular Disease. Ascorbate deficiency is the result of the inability of man to synthesize ascorbate endogenously in combination with insufficient dietary intake” (http://orthomolecular.org/library/jom/1992/pdf/1992-v07n01-p005.pdf). Vitamin C is needed to create collagen fibers. Premature Cardiovascular Disease is essentially unknown in all animal species that produce high amounts of ascorbate internally.

Dr. Pauling thought cardiovascular disease is a form of chronic pre-scurvy that results from years and even decades of inadequate levels of vitamin C that would otherwise repair and replace collagen fibers in the vascular tissues.   In a scurvy patient, bleeding occurs through the arterial wall because it is weakened due to lack of elastin and collagen fibers. Lipoprotein(a) binds to form a patch. But too much of it leads to plaque formation.

“After the loss of the endogenous ascorbate production in our ancestors, severe blood-loss through the scorbutic vascular wall became a life-threatening condition. The resulting evolutionary pressure favored genetic and metabolic mechanisms predisposing to Cardiovascular Disease. About 40 million years ago the ancestor of man lost the ability for endogenous ascorbate production. This was the result of a mutation of the gene encoding for the enzyme L-gulono-glactone oxidase (GLO), a key enzyme in the conversion of glucose to ascorbate. As a result of this mutation all descendants became dependent on dietary ascorbate intake. Our ancestors at that time lived in tropical regions. Their diet consisted primarily of fruits and other forms of plant nutrition that provided a daily dietary ascorbate supply in the range of several hundred milligrams to several grams per day. When our ancestors left this habitat to settle in other regions of the world the availability of dietary ascorbate dropped considerably and they became prone to scurvy.”

All animals with the exceptions of guinea pigs, monkeys, and humans can produce their own vitamin C.  For example, a 155 pound goat can produce over 13,000 milligrams of vitamin C daily. When facing significant health stresses, vitamin C-making animals can increase vitamin C production by as much as 13 times their normal levels.

Dr. James Enstrom at UCLA conducted a study of more than 11,000 human subjects (1992). Those individuals who regularly took supplements of vitamin C at federally recommended levels had significantly lower rates of heart disease than did those who did not.

1) Vitamin C (ascorbic acid, not ascorbate) 6 to 10+ grams per day in divided doses throughout the day.

2) L-Lysine  4 to 6 grams per day in divided doses throughout the day.

​”Knowing that lipoprotein(a) attaches to the artery at the lysine binding sites forming atherosclerotic plaques, any physical chemist would say at once that to prevent that, put the amino acid lysine in the blood to a greater extent than it is normally to give lipoprotein(a) something else to attach.”  92 year old Linus Pauling, PhD

It would be wise to consider Professor Pauling’s findings.  He was awarded two unshared Nobel Prizes. And during my first private meeting with him (picture above that he signed) he told me that while giving a lecture in California during the time of the Manhattan Project (of which he was not a participant), someone in the audience asked how he would make the atom bomb.  He proceeded to outline the steps. Someone else in the audience called the FBI who then removed the Professor.

At the end of our first meeting at a time when my first book, Cancer and Nutrition, was published, he convinced me to take more vitamin C and I persuaded him to take beta-carotene.

1) Vitamin C (ascorbic acid): 6 to 10 grams per day in divided doses throughout the day

2) L-Lysine: 4 to 6 grams per day in divided doses throughout the day